12 Stars are back in business

12 starts came back stronger in style by winning the second BCF league match by a massive 235 runs, The opponent is Antwerp Cricket Club. This intensity is to be continued for the rest of the season.

While the Warmness and fragrance of Spicy Black Eyed Beans Potato Curry felt during our  journey to the ground the same warmness  is felt in the ground on seeing all the stars from belgium, nederlands and germany coming together and playing. It was a great site to see the ground marked with measured boundaries , erected stumps and  corrected run-ups.. all before the match manager arrived to the ground. Thanks for the guys who did the great job on my behalf.

With gloomy and drizzling weather  consistently  becoming demons for our club, We started the game with the similar conditions alike first league match. But this time we batted first after our captain winning an important toss.  The weather thankfully improved by time for a good game of cricket.

Thanks to Swaroop and Ani for their responsible batting

Ajay and Rahul opened the innings for 12 stars, Rahul looked crisp and scored at a brisk rate with 2 fours and a beautiful lofted six over long off. Ajay rotated the strike well and spent a good 30 minutes in the wicket before losing his wicket for an outstanding catch by Benjamin at gully. Rahul too left soon after he  crushed his foot with his bat while defending a fiery Yorker.  The scores were 52 for loss of 2 wickets at 10 overs with a major contribution from ACC bowlers in terms of wides. Swaroop playing in his debut showed his class by taking complete control of the game with clean defence and casually placed careful singles. Swaroop and Ganesh made a handy 50 runs partnership filled with singles and doubles challenging the bowlers and their fielders J in getting their wickets. Ani and Swaroop made an  80 runs partnership for the 3rd wicket. With the scores reaching 183 in 36 overs, Swaroop lost his wicket to Benjamin for 76 valuable runs.  Amit joined Ani and played sensibly to take  the scores past 200 and gave the opportunity to others to free their arms. Ani with his good form scored a run a ball 60 runs with  3 balls sailing past the rope. With the kraken failing to meet the expectations of team one more time, the muscular rohan took a ride on their bowlers scoring 34 runs of 22 balls including 2 sixes and a four. We ended our innings after 50 overs scoring 268 runs for the loss of 7 wickets, Thanks to Swaroop and Ani for their responsible batting.

During Teas, we had the delicious Black Eye Beans Potato Curry (Halal) and went quickly back to the ground for 2nd Innings.

Rohan with his tempo already up, banged the new ball short, the batsmen Wahidullah  cut hard only to find the Rhodes Anshul taking a superb and fantastic low catch, diving forward. Then it was left to Ani for claiming his nth 5 wicket haul in a Division 1 game. Though it is an regular sight for all but on taking a closer look,  you will realise, that he bowls each and every ball with the intent of taking a wicket showing discipline and greater level of consistency in repeating his strength over a longer period of time. There is no surprise with this consistency he was on hat-trick twice in the game. Kudos to Ani for his six wickets haul.  Rohan after bowling an average 5 overs to his standard, came back strongly in his 6th over to remove the long standing opener S Newport with debutant Shreyans taking a nice cool catch at covers, One ball later rohan bowled a beauty to Benjamin, a nice nick of the bat with batsmen playing in his front foot and the ball reaching Amit at a very good height for a traditional first slip catch, A classical dismissal that can be replayed in bowlers mind time and time again. Swaroop did a cool job behind the wickets. In total the ACC team was dismissed for 33 runs in 12.2 overs with Ani claiming 6 wickets and Rohan claiming 4 wickets, simply just running through the side.

12 Stars are simply back in business.

Man of the Match:  Swaroop Poduval for his valuable 76 runs and staying in the crease for 2 hours

With a lot of time left for the drinks, there were nice futuristic discussions about our next generations playing cricket and about the wax museum with Legendary Manoj in his T Rex position bowling the Doosra. 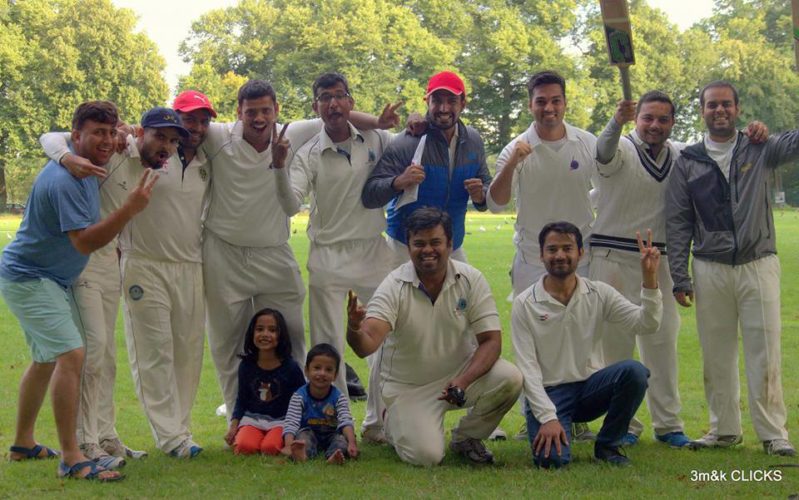