The 1st game of the double header weekend where the Stars were getting prepared for a gloomy day at office with some clouds around and even a couple of showers to play the spoilsport but to our surprise the weather was picture perfect to play cricket with bright sunshine falling on the field.

Planning to field first against Exiles which is contrary to our general strategy this season, captain Nemish continued his toss winning streak and 12 Stars CC opted to bowl first so that was the first small milestone achieved in the game. We had two debutants in this game Sharifullah and Amrullah and they were welcomed to the club in the team huddle by our veterans Ani and Manoj.

12 Stars’ bowling attack is known around Belgium to strike early while bowling and it was indeed a dream start from our opening Srikanth and Vishal where Sri struck a double blow in his very 1st over and second over of the match. Nemish with his safe pair of hands taking a good AUSTRALIAN CUP catch on mid-off and then our youngest member to play the senior cricket Amrullah taking a lovely catch at covers. Vishal was rewarded for his consistent bowling as well when he got a wicket in the very next over reducing the opposition to 5 runs for 3 wickets in 3 overs. I was personally in the awe of the moment as all the pieces of the puzzle were automatically fitting the way we wanted. Rajiv was covering for the wicket keeping position in this game and he made his presence felt in the 5th over of the game where he gathered the ball removing his gloves from a not so good throw (away from the stumps, other than that, all was good about throw) and hitting the stumps and choking Exiles even further.

This brought the best batsman of Exiles to the crease, and we saw partnership developing, where Sarath stepped in with his classic leg spin to get rid of a set batsman, the score now was 63-5 in 15 overs. Since the powerplay got over Ani was keeping 1 end tight without giving easy runs despite of the field been opened. In the 16th over Sulaiman from Exiles played a flashy square cut and our deep point field Satish came in running and took a wonderful popping catch. The evergreen Manoj could not be left out of action when he took a one-handed stunner off his own bowling and running in the whole ground like the famous Imran
Tahir celebration and then realizing that the ball was hit too hard and that may have caused an injury to him. It was a peculiarly hilarious moment for everyone during the team huddle. We saw some hard hits from the lower order, and it was the combination of Manoj and Nemish’ AUSTRALIAN CUP love affair which helped us breaking in to the tail even further where Nemish took a fantastic flat catch at long on. The came in the wonderful and smiling Amrullah to bowl and he impressed everyone on the field with his consistent line and length outside off and did not give an inch to the batsmen to score and was rewarded in his 3rd over with a wicket with Exiles now being at 157 for 9 in 36 overs. The team strategy was to bundle Exiles under 150 which was going well. We were able to get Exiles all out for 182 setting a target of 183 for ourselves.

So the chase started and Rajeev and Nemish started cautiously as the required run rate was never going to trouble us and it was all about roasting the opposition without giving them easy and early wickets. The runs kept coming steadily and the plan was working nicely until Nemish got an inswinger which clipped off the bails in the 9th over with the Stars at 32 for 1. Rajeev kept playing his strokes as Arshvir stepped to accompany him on the crease and the score was ticking nicely. Unfortunately, Rajeev got out on a aerial square cut with the deep point taking a really good low diving catch. This brought Sarath to the crease where he smoked his 2nd ball off to covers for a boundary. After playing a couple of lovely shots through the off side, Sarath was unlucky to get caught behind on a ball which kept low and getting the under edge of the bat. Ani fell prey to the fiery fast bowling as well and at that moment we were 70-4 in 20 overs. Then came in Mr Srikanth who is really a blend of Dravid and Russell to support Arshvir. Both were going well with an aim to spend 5 overs at a time and the required run rate being modest did not really panic any of the two and Srikanth took his time in the middle to settle and at the same time also playing flamboyant strokes to keep the sledging from Exiles to the faintest level. Srikanth at the start of the innings was blocking the ball
so well that it did not even get off the pitch, picture perfect defence as they say and on a free hit Sri clobbered the ball for aninside out lofted drive over covers for a six against the fastest bowler in the Exiles team giving a stare to the chattering keeper. Till the 2nd drinks break Sri and Arsh had taken us to 115 in 31 overs.

We hear a lot about brain fade moments and we experienced another as after the drinks break, Arsh was just unable to play the ball and time it as he was doing before. According to Cheeka it might be because Arsh got his cap after removing his helmet. Arsh survived a LBW appeal on a full toss and on the same ball also survived a close run out call and the ball after Arsh missed another full toss which caught him PLUM in front of the wicket. As usual, Arsh being Arsh blaming the umpire and giving all sorts of stupid explanations. This brought Vishal on to bat with Srikanth with another 65 runs needed to win in 18 overs. The patience and determination to get over the line which was showed by both Sri and Vishal as commendable.

Another funny moment to capture was on a series of drop catches from Exiles. So, Vishal got a top edge where the fielder just ran entangling himself to judge the ball and eventually was never able to get it where Soheel the captain of Exiles threw his cap in disgust and in the very next over Soheel himself dropped a sitter on mid off and we were looking on the field on who would throwing his cap now. Sri and Vishal indeed capitalized on the missed chances and runs started to come freely and with every run scored the opposition just kept on sinking. After crossed 150 in the 41st over it was just a matter of time as Exiles had given
up and that allowed Srikanth and Vishal to easily score runs. As we got closer Sri completed a very well-played half century, an innings that is a lesson for everyone of us. Unfortunately, Sri was not able to finish the game and he got out with 2 runs still needed. Then went Sharifullah who carefully defended the last ball of the 46th over and in the next over, Vishal scored the deserving winning shot.

It was a sweet victory to cherish as it was a complete team effort with everyone contributing with the ball, in the field and with the bat too. This game would give a strong message out to the other teams of the temperament that 12 Stars is bringing to the table this season. Srikanth was awarded the Man of the match for brilliant all round performance

Let’s keep having fun and enjoy the company of each other as we have been doing so far this season and rest all will fall in place automatically. 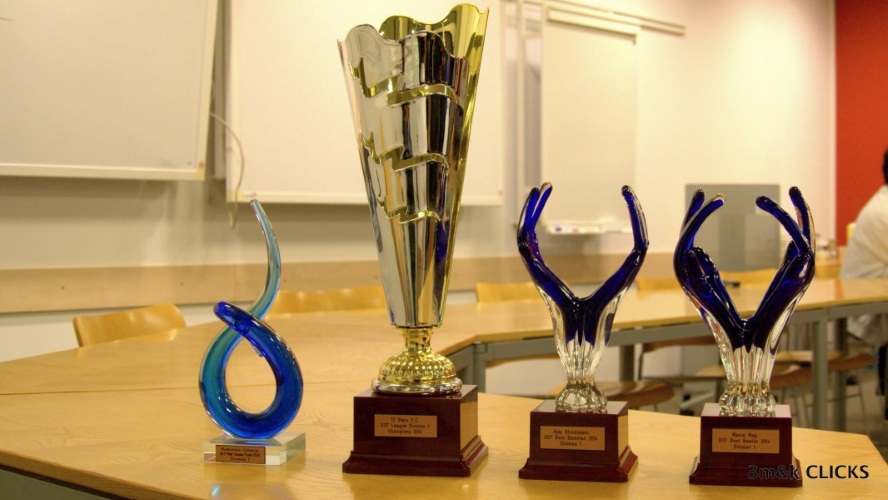