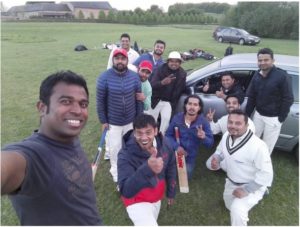 Hail(storm) the Belgian Weather Forecast. Saturday, the 13th of May was supposed to be cloudy,rainy and stormy and what not… And what did it turn out to be? A perfect day, for a perfect game of Cricket.

With the previous week game against the Crescents casting a shadow on the otherwise optimistic 12Stars, it was high time to bring the Sunny days back to the club. Ostend had never been an easy opponent for 12 Stars and 2016 went a long way to prove that. We had lost both the league games last year to them, who eventually went on to become the Champions. So, with more than  a point to prove, the captain of 12 Stars, Aniruddha came up with a specific plan, starting right from the selection of the Team.

Ostend’s intention was very clear with 5 National team players in the squad against the Stars. Ani won the toss and had no doubt in electing to bat. With regular opener Ashish not available, Asijit jumped in to fill his shoes. Aziz and Faisal, two great fast bowlers started to outshine 12 Stars with the shine of the ball, but the two technically correct batsmen of 12 Stars thwarted all their efforts, until an unlucky Swaroop played on to his stumps of Faisal’s bowling. Ani stepped up and wanting to shoulder the batting responsibility went in at number 3. But a Faisalbulous inswinging yorker first up destroyed his plan to play a long innings. In went Bhushan at No 4, to steady the ship along with Asijit who was patiently building his own innings. Abdul Rehman, the youthful ever at 44, replaced Aziz and started to bowl his trademark bouncers that kept the Stars on the toes, quite literally. An intelligent bowling combined with a slight misjudgement, both by the batsman and the Umpire, resulted in Asijit walking back to the pavilion out LBW.

Promoted up the Order, the Bahubali of 12 Stars, Ayyappan walked in. Bhushan and Ayyappan combined well and together, looked like an “online tutorial” to many of the players out there. While Bhushan did have few lucky hiccups, Ayyappan on the other side was frustrating the Ostend bowlers with his sensible and bullish blocks. Ayyappan broke out free with a thunderous six and a boundary, but the momentum got the better of him as he was well stumped for a well-made 28. At 77/4, the road for recovery was still very far as Amit joined Bhushan in the middle. Both of them combined to give another good but quick partnership that 12 Stars desperately needed at that stage of the innings. Amit was out for a well-directed bouncer after scoring two great boundaries from the first 2 balls of Abdul Rehman’s over. JD went in and the man on a mission, Bhushan’s message was “Play your innings for I’m going to stay till the end of the innings”. After a 24 run partnership, JD also succumbed and the rest of the tail could only support Bhushan, but not add much to the Team’s score. When Bhushan was the last to get out on the 48th over, he had already played 22 overs himself for a thoroughly, matured and a professional 58 runs that enabled 12 Stars to reach 168. In another ground, 168 was just a target, but as 12 Stars, we know that, it was quite a sizeable target at Bilande. Particularly, with the bowling quality and the depth that the Stars had, Ostend knew that it would take quite a task to reach there.
New ball and Rohan made his way to…………..the mid-wicket…. That was quite a strange sight to everyone [of course apart from Ani, who made the decision] when Nauman started the proceedings. Aziz and Farooq opened very cautiously having been completely taken aback by the unorthodox and unexpected opening bowling that 12 Stars unleashed. While Nauman found tough to find his rhythm, Ani was finding his with ease, on the other end. Before long, Rohan was brought in and started to trouble the batsmen immediately with his pace and short deliveries, like a Fast bowler should. Soon, Patience got the better of Aziz as he was tempted to clear Rohan for a six and was caught behind, having misread a slower. That was the breakthrough 12 Stars needed, as soon Ani on the other end trapped Farooq right in front of the wicket. The bowlers worked in tandem with both of them restricting the run flow thereby increasing the pressure on the visitors.

When Faisal Mahmood was out for a lovely caught and bowled effort by Rohan, the score stood at 39/3. But quite honestly, at that point of time, it was anybody’s game really. With JD not doing the job he was asked to, Ani soon got his trump card Anshul into the attack and also bringing on Sazzad from the other end. Anshul reaped the reward just into his second over when he got the dangerous Muhammad Shafqat bowled by a flighted beauty. In walked Sunny Sheikh, someone who has had a lucky ride in his previous outings with the Stars, where we had dropped so many catches of him. He hit a whippy boundary of Sazzad and that would remain as the last boundary that Ostend scored.

Anshul immediately got into business in his next over when his loopy loop looked like a lolly pop to Sunny and he popped it up so high in the air and into the steady and focussed hands of Amit, without a pop. Abdul Rehman took his stance and just 2 balls later, a misunderstanding coupled with a wonderful fielding and a “falling but not failing” throw from Amit, secured a welcome Runout for 12 Stars that left Deepak well short of the ground. With one dangerous batsman out and a rather unexpected wicket, only Abdul Rehman was standing between the Stars and the Victory. Faisal Khaliq, the opening bowler from Ostend joined Abdul in the middle as they looked to consolidate the innings and take Ostend to safety. Anshul’s spin had a completely different plan though. Another flighted delivery on the off, invited Abdul Rehman to hit a skier that took the outside edge and landed into the bucket hands of Rohan much to the delight of the team and in particular Rohan, who had just dropped Faisal in Anshul’s previous over. A brief resistance followed from the subdued tail of Ostend before a flat shot by Faisal off Anshul was cleanly taken by Amit to signal the closing stages of the game. Anshul finished an ever-important spell and Nauman took over from him and took the remaining 2 wickets as the Stars completed an emphatic victory over Ostend by 62 runs.

So loud were the three cheers which 12 Stars made after the game, that it could have been heard from Ostend even. The Post match review and retrospection gave insight to the plans that Ani had made specifically for Ostend. A truly wonderful victory and that too against a team like Ostend, just made it very special indeed. This match was one true example of team work, since everyone contributed in one way or the other. Ani, Nauman, Rohan with their wonderful bowling, Amit, Ayyappan, Sazzad and JD with their resistance in batting, Asijit and Swaroop with their excellent agility and the run saving ability in the field and Bhushan with his focussed innings and Anshul with his magical spell. Eventually, Anshul was named the “Player of the Match” 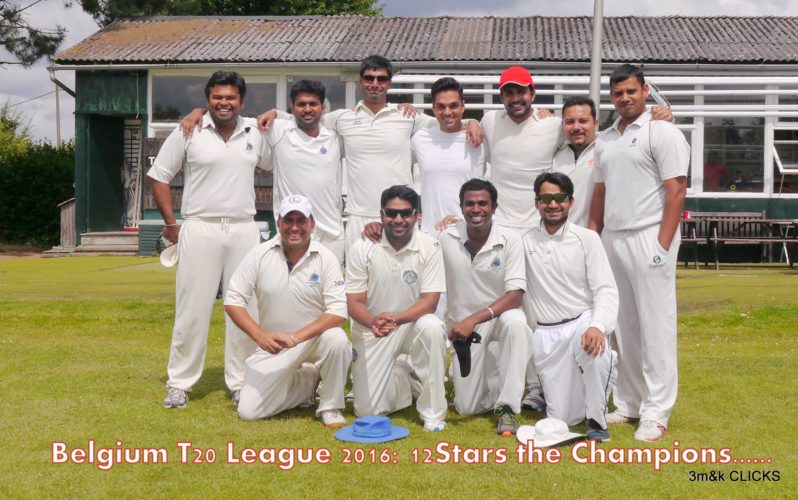