All good things come to an end; bad things are no exception either.

After having won 5 consecutive games, there was an extra player in the 12 Stars army named “Confidence”. It was an all important game, to say the least. With bonus points accumulated all along the hunted path, a win is all 12 Stars needed to rest their hands on the most coveted Trophy of all times and to be crowned the Champions of Belgian Cricket. Wow is what you would say now, but if you look back at the way we started, no one would have given us a chance, none from 12 Stars even.

Out of the 6 games played, 4 were played at Bilande, and we had won all 4. Out of the 5 games won in total, only 1 was while batting first. So, it was almost an easy decision for Amit every time he won the toss. And then, the Toss happened. Ostend seemed to have done a bit of homework and so when they won the toss, they put 12 Stars into bat. The sigh from 12 Stars wasn’t that audible anyway and the game got started.  September 14, 2014 was all about the Strength of Character.

The ever reliable and durable AA batteries, Ajay and Aashish went into bat yet another flawless opening partnership of half century, only to make the previous innings look like the net sessions that they had before this game. The 6th fifty runs partnership in 7 games outlined the massive improvement in the 12 Stars batting line up. When a fluent Aashish was out, Rohan joined Ajay who was coasting to a splendid fifty. A quick fire but well composed innings by Rohan was ended by Abdur Rehman. Ajay, on the other end not only was anchoring the innings, but was also sailing fast at the same time. With no official umpires around, Vijay volunteered to do the duty. When a close LBW appeal for Ajay from Abdur Rehman was turned down by Vijay, there was a sigh of disbelief from the Ostend guys. A minute or two was spent by the Ostend deliberating the decision of the “Stand-in Umpire”. Ganesh sensed that there were growing tensions, and promptly replaced Vijay with himself. As though waiting to even the game and reduce the tensions back to zero, Gannu decided to lift his finger even before the Ostenders appealed for a thick inside edge from Ajay that went on to hit his pads. It looked more like Gannu appealing silently, and Ostenders acknowledging with a shout. When a shell-shocked Ajay felt like he was hit under the belt [literally], something unexpected happened. Abdur Rehman, obviously knowing that the edge was louder than the appeal, withdrew the appeal and made Ajay come back to his crease. This magnanimity happened when Ajay was 87. Any normal cricketer would have seen this as a danger and would have made use of the misfortunate verdict of the Umpire. But Abdur Rehman, like his physique, his character stood tall too.

The situation was welcomed with a loud applause from the 12 Stars dugout with every team member loudly appreciating the decision.  Ajay went on to score a polished and fluent century and was out eventually trying to accelerate, to a well-made 122. A very consolidating and boundary laden 35 by Aniruddha, cameos by Amit and JD lifted the scores to a respectable and defendable 275 off 45 overs.

With a disciplined and dangerous batting line up that Ostend had, 12 Stars knew that,  all they had to do was to stick to their basics, something that, both the opening batsmen and the opening bowlers did very well this season.  With Aashish out clutching his knee, Sandeep was the man in “(k)need”. When a top edge from Iqbal flew to Square leg, the initial impression from 12 Stars was that, Sandeep had misjudged the catch.  Well, the man who mattered, Sandeep, jumped to perfection, and with one hand, completed a beautiful catch that set the tone for the heavy run chase.  Aniruddha and Rohan were on fire when 2 more wickets fell to their aggression, with 2 catches, Bhushan making slip catching look so simple and one by Manoj covering quite a distance.

The captain claimed the 4th to send Ostend reeling and closing in at the jaws of defeat. This brought the best 2 batsmen of Ostend, Sunny and Abdur Rehman to the crease. Sunny was once again with his best companion, Mr Luck, when 12 Stars started to drop his catches. Ajay still a bit dizzy after his century, dropped 2 catches, easy according to his standards. With Manoj getting increasingly angry and aggressive, the pair started to free their arms and inched towards the halfway mark. An expensive Manoj and a Fazil in the audience is probably not the best combination, with Fazil mouthing Manoj about his talent to give away sixes. True to his words, the first 2 balls off Manoj were sent to a good 80 meters by Abdur Rehman.  12 Stars camp went all hush never having seen such huge sixes by any off the batsmen at Bilande. A thoughtful and focussed Manoj went back to his bowling mark with the same energy even after being belted for 12 off 2 balls. On the third ball, as he was hitting the popping crease, Abdur made the charge and Manoj brought on his magical, “Usain bolt dart ball” that yorked Abdur Rehman and hit the middle stump which sounded like a delightful Hallelujah chorus to the whole of 12 Stars. When everyone ran towards Manoj, Manoj ran towards Fazil with pointed fingers, obviously having made the point.

When a further inside edge from Sunny gave Manoj another thoroughly deserved wicket, 12 Stars were back on top. But Khan was making it look like a Roller Coaster when he hit a fine half century that was so smooth that 12 Stars couldn’t believe he had reached his fifty. Further drops from 12 Stars made only their own lives miserable with the Ostend lot making it look winnable. Rohan was brought back into the attack, and immediately Khan skied one to mid-off. Though Amit’s hands looked uncomfortable under the ball, his hungry and focussed eyes were so fixed on the skier and eventually took a tumbling catch that shifted the game again in 12 Stars favour.  With wickets tumbling at equal intervals, and with needing 44 to win off 3 overs with one wicket in hand, Ostend tried to speed it up by running 2 runs on a comfortable single. A long throw from JD rested in the hands of Peter Whitten. Peter along with the bails, toppled the long standing supremacy of the otherwise Royal clubs. Where OstEND, 12 Stars began. Rohan sparked Wild celebrations by removing his T shirt and almost everyone followed not worrying about what sight it may give, to the otherwise desolate onlookers. With T-shirts sprayed on the ground, and having sweated out for 86 overs on the field, a hug would have been the last thing that anyone ever wanted. But the sweet smell of sweat underlined the struggle that 12 Stars had gone through the years, trying to hold on to its feet when the other clubs didn’t even consider them a worthy Opponent.

25th Anniversary of the Club, Own Ground and Division Champions, all in the same year, even though few would argue, that the first 2 are better achievements than the latter. Whatever field you are in, your experience can only be proved with a Certificate and that Certificate for 12 Stars was “The Champions of Belgian Cricket”

The Good news went viral and soon there were too many Champagne bottles at the Standby Clubhouse of Bilande. Amit summed up the whole season giving credit to each and every individual responsible for the Season’s success. And as a finishing touch, rightly handed over the Champagne to one of the True 12 Stars, Mr. Peter Whitten, who through the years have seen it all for the Club. It was massive celebrations and hugs all around, symbolizing the best Season 12 Stars have ever had.

Division 1 started with a loss but the resolute strength of Character from 12 Stars showed everyone, how dangerous a team can be, when you play as a Team. Hail 12 Stars, the Champions of Belgian Cricket. 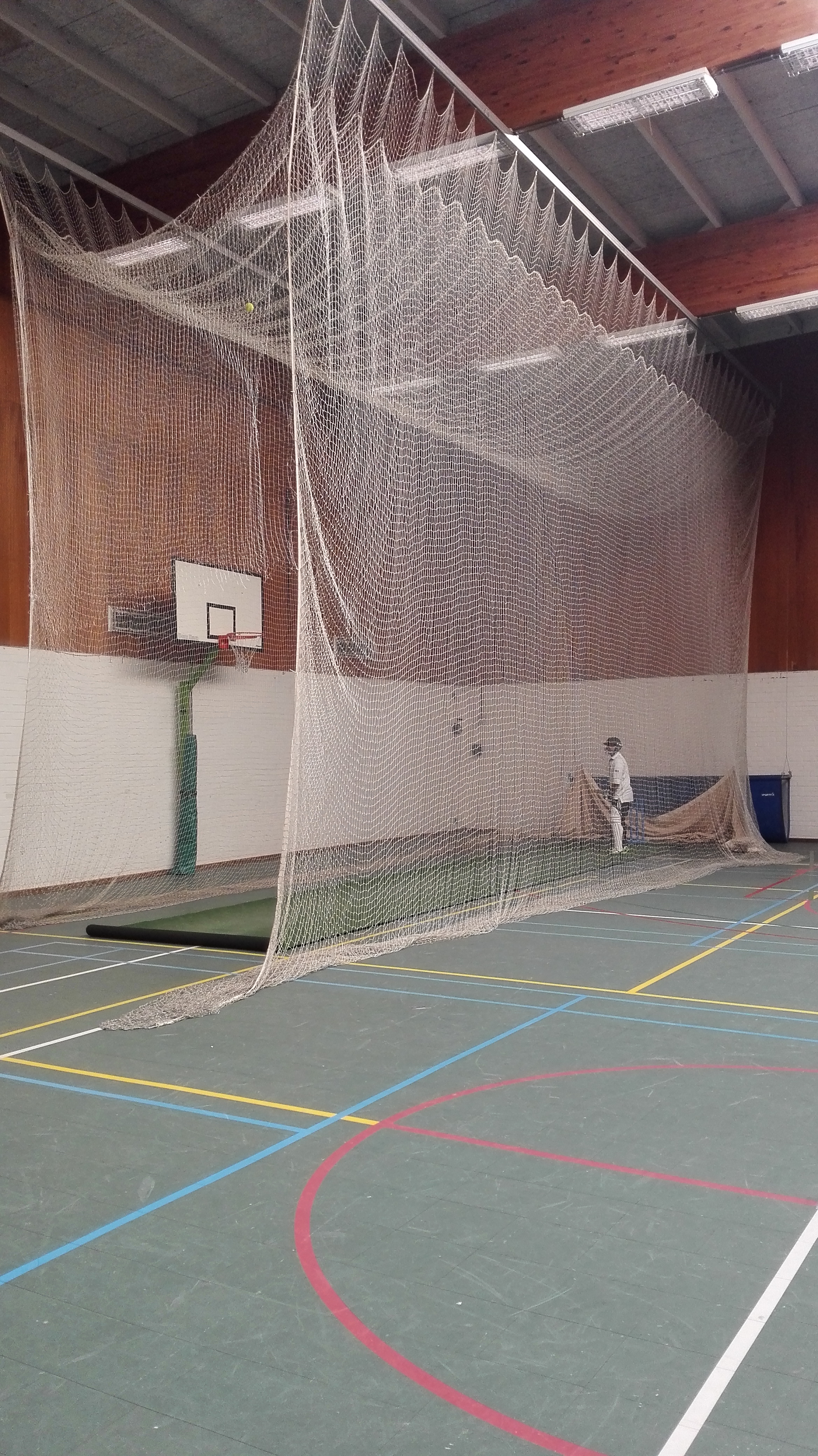 Saturday morning, Sun out a bit 😉 unusual –>attributing to the global warming’s contribution to the already gloomy weather of belgium. The […]

One thought on “Match Report: 12 Stars Vs Ostend”